Everything You Need To Know About Lab Created Diamonds 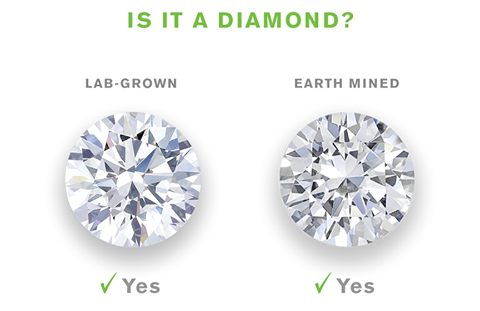 Diamonds....a girls besat friend...the hardest substance known to man....the most exquisite and valuable stone in the history of mankind...

We all know the story. 95% of all engagement rings presented in the US feature at least one Diamond. Their sparkle is transcendent, their fire mesmerizing!

So why mess with such a perfect piece of nature? Well, they are pretty expensive, and if you could replicate the stone nearly perfectly at a fraction of the cost....why not?

Welcome to Lab Created Diamonds, diamonds made by actually replicating the natural process.

Diamonds, are formed in the Earth's crust thanks to very high temperatures and extrememe pressure underground over the course of thousands of years. Due to such a rigorous

and time consuming contingencies, scientists have been trying to reproduce the brilliant stone since the 1950's. Various types of faceted glass were the early entries, but had no

fire.  Eventually Cubic Zirconia was produced, and while it had many of the features of real diamonds, they were a little too perfect in color and quality, and not very long

lasting. Any discerning eye could easily tell a CZ from a real diamond.

But the scientists didn't give up. After many futile attempts, technological breakthroughs allowed them to make definite progress. They discovered

two different systems for creating stones so incredibly close to the real thing that they are now being graded by some of the largest gemological institutes in the world.

Let me describe the two systems:

This process uses a small bit of diamond known as a starter seed put into a chamber with ultra clean carbon gasses such as Methane, which is heated until it breaks apart

allowing the carbon atoms themselves to separate. They fall into a diamond substrate resulting in a rough diamond crystal. This process takes 6-10 weeks to get to a mature

stone. This stone is then cut and polished in the exact manner as a real diamond.

This process works exactly like it sounds. Pure carbon and tiny pieces of diamond (starter seed) are placed in a high temperature high pressure chamber, quite similar to the

These machines use pressure as high as 65,000 atmospheres and temperatures upto 2800 degrees Celsius. The seed actually melts into a molten state and then cools to a solid

state. The cooling allows the carbon to build upon the seed. Again, after 6-10 weeks the stone is totally formed and ready for cutting and polishing. This process also allows for

larger stones to be created than the CVP method.

The results from both these processes are brilliant stones that mimic diamonds in every visual and physical sense. Best of all they are 30-40% less expensive than natural

diamonds and they are all conflict free.

While there will always be people that insist on the natural stone grown in the Earth, Lab Created diamonds are an extremely viable alternative. As I've stated earlier, they are

now grade and valued in the same manner by all the top Gem institutes. you are no longer buying a worthless substitute, but rather a fine gem created by man!