A 910 carat raw diamond, found this January in a mine in Lesotho was sold last week in Antwerp Belgium for $40 million. This is the 5th largest diamond EVER found. It has been named The Lesotho Legend as it was discovered in the mines of Lesotho. Lesotho gained its independence from the United Kingdom in 1966.

The diamond is said to be a Type lla with an unbeatable D color, the highest color available. The $40 million works out to approximately $44,000 per carat, high, but far from the record.

Many people have asked over the years how a raw diamond is recognized.  Looking at the crystal form is a quick way of differentiating diamond from most of the other minerals that look like diamond. See the chart below: 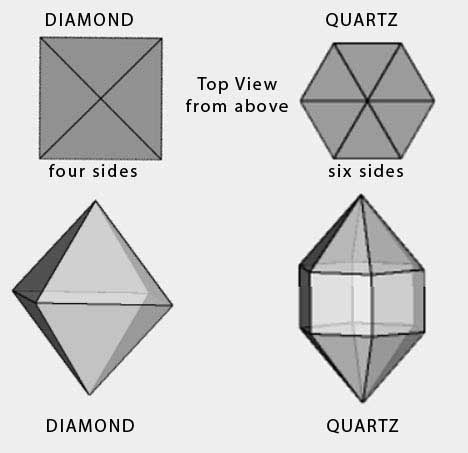 Diamonds are cubic . The most similar mineral to a  a diamond is quartz and it is hexagonal. When looking down on these minerals , with the point of the crystal aimed at your eye, quartz will have six sides and a diamond will have four sides. If you see six sides it's quartz.

Naturally, all the finished diamonds we see today in Engagement Rings, Diamond Pendants, Necklaces and Earrings were originally cut from a much larger raw stone. They are cut and polished to the brilliance  we have grown accustomed to seeing. This is not to say they will cut this down to 910 One Carat Diamonds, definitely not. But the process remains the same despite the size of the original. Let's not forget that diamonds are cut into so many shapes including Round, Princess cut, Pear shape, Marquis, Emerald cut, Cushion cut, Trillions and Baguettes.

The choice is yours!

For more information on the "Lesotho Legend" go to GemDiamonds.com.