On July 15, after a full month of heart-thumping competition, the members of a single national team will emerge as champions and experience one of the ultimate thrills in professional sports — raising aloft the 18-karat gold FIFA World Cup Trophy. Four years ago in Brazil, that honor went to the soccer team from Germany. This year in Russia, 31 teams will be vying to unseat the defending champs. 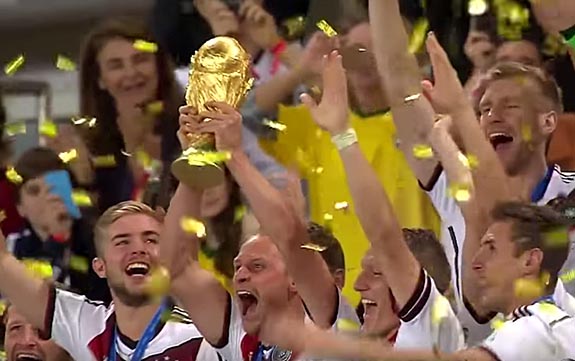 The coveted trophy, which is 14.5 inches tall and depicts two human figures holding up the earth, is made of 11 pounds of 18-karat gold and features two rows of green malachite at the base. USA Today reported that the trophy is estimated to be worth $20 million, although the actual precious metal value is closer to $168,000.

For years, FIFA, the governing body of soccer, had said the trophy was made of solid gold, but that claim hasn’t held up to scrutiny and it’s very likely that it has a hollow center.

Martyn Poliakoff of the United Kingdom’s Nottingham University did the math and determined that, based on its dimensions, a FIFA trophy made of solid gold would weigh an unwieldy 154 pounds. Gold is nearly 20 times as dense as water, and to get some perspective on just how heavy that is, consider this… A standard gold bar measures just 7 x 3 5/8 x 1 3/4 inches, but weighs more than 27 pounds.

The winning team will be taking home a gold-plated replica of the actual trophy. The real one will remain in the possession of FIFA. The bottom of the base bears the engraved year and name of each FIFA World Cup winner since 1974. The names are not visible when the cup is standing upright.

The tournament takes place every four years, and FIFA announced recently that the North American triumvirate of the U.S., Canada and Mexico will co-host the games in 2026. 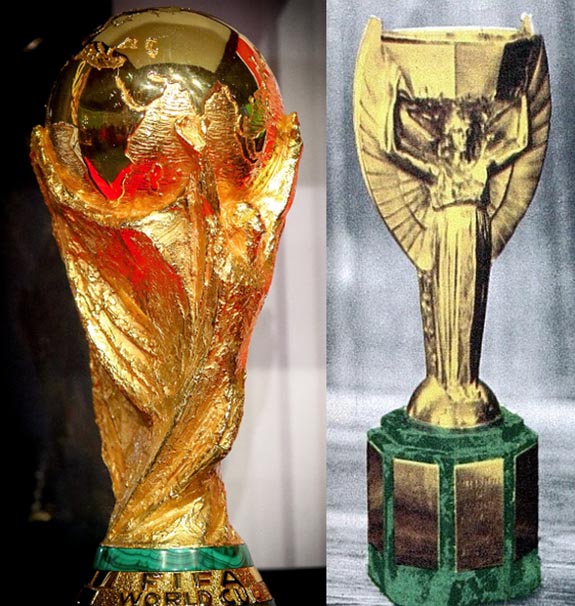 For the past 88 years, there have been only two designs for the FIFA trophy. The current one was conceived by Italian artist Silvio Gazzaniga and presented for the first time in 1974.

In describing his design, Gazzaniga said, “The lines spring out from the base, rising in spirals, stretching out to receive the world. From the remarkable dynamic tensions of the compact body of the sculpture rise the figures of two athletes at the stirring moment of victory.”

In 1970, the Brazilians got to keep the previous version of the trophy — the Jules Rimet Cup — when the team captured its third world title.

Rimet, the founding father of the FIFA World Cup, had stipulated 40 years earlier that any team that won three titles could have the cup permanently. FIFA made good on that promise in 1970, but in 1983 the cup was stolen in Rio de Janeiro and never seen again.

The Jules Rimet Cup, which was originally called “Coupe du Monde,” was designed by French sculptor Abel Lafleur and depicted the goddess of victory holding an octagonal vessel above her. It was 13.7 inches tall and weighed 8.4 pounds. It was made of gold-plated sterling silver, with a base of lapis lazuli.

In 1966, an earlier version of the Jules Rimet Cup was stolen from a public display in London just before the Brits were about to host the World Cup. It was discovered seven days later at the bottom of a suburban garden hedge by a clever canine named Pickles.

During World War II, the Jules Rimet Cup spent some time in a shoebox under the bed of FIFA vice president Dr. Ottorino Barassi, who feared it might fall into the hands of the Adolf Hitler and the Nazis.

Brazil currently holds the record for the most FIFA World Cup victories (5), followed by Italy and Germany with four wins each. Favored teams in the current tournament include Brazil, Germany, Spain, France, Argentina, Belgium and England.