Cameos and Their Illustrious History

One of the oldest forms of jewelry, and art, is the Cameo. Actually defined as a relief raised higher than its backround and carved of a single material, Cameos are actually from the times of the Roman Empire. It was considered an object of virtue by the Romans. Hand crafted they were not unlike the work of the great sculpters. While most are carved out of conch shell or agate, it was not uncommon for engravers to use precious and semi-precious stones for carving.This was a way to draw out the variety of distinctive hues of the stones. The carver exploits the different variations of color that are in the layers of shell or stone and with that they’re able to carve different motifs in low relief. Common motifs included the Emperor, king, queen or royalty of the times. Also extremely popular, especially in ancient times, were scenes of mythology.

Cameos, being of great value, were passed down from generation to generation and became extremely popular again in Renaissance times. While the frames or bezels were often changed, the small works of art held up over time. It was a clear sign of wealth to wear a cameo during the 14th -17th centuries, and women displayed them proudly.

By the early 19th century, their popularity plummeted. but in the late 1800's there was an uptick. The cameo moved from the realm of the wealthy to a far broader audience, Increased wealth among the European middle class and increased travel meant a demand for souvenirs, especially from trips to Italy. Never underestimate the desireability of souvenirs.The shell cameo industry in Italy increased in size to meet demand. By the onset of the 20th century, Cameos were back in a big way.

Today, artisans continue to hand carve Cameos froma larger variety of stones. Unfortunately, there are now machine cut cameos which are dull, uneven and in no way comparable to the hand carved. Butthey are cheap and are often sold to fool the consumer. Don't be fooled! 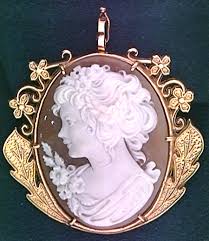 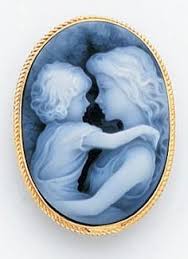 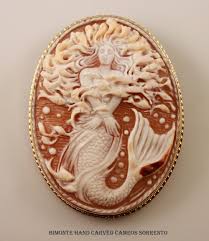